News | No Secret at LED Dimming-What’s a good dimming driver?

Since people have found that light atmospheres can affect our emotions, the requirement for dimming is becoming stronger and stronger. A good led controller/driver is like human’s heart, it is necessary for the continuous operation of LED lamps. It must meet the stringent requirements of LED lamps at dimming range, accuracy, efficiency conversion, lifespan, compatibility etc. 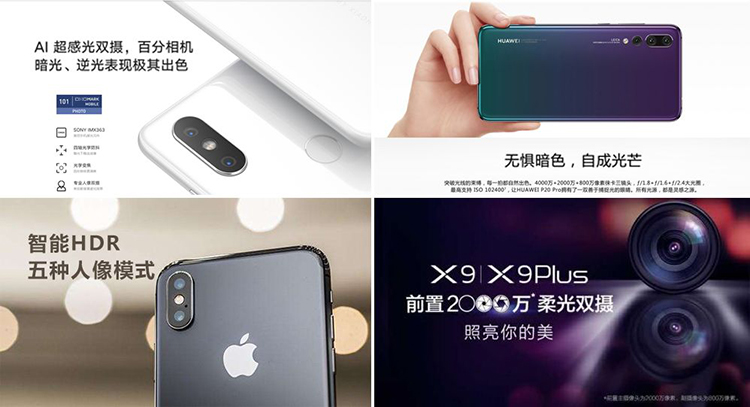 So, how’s a good dimming driver? --Let’s start from below 3 kinds of dimming modes.

In LED commercial lighting industry, we often hear some key words, like DMX, DALI, 0/1-10V, Triac, Wi-Fi, Bluetooth, RF, zigbee...And many people would mistake them as the standard of evaluating good/bad dimming, but actually they are only input signal, have little matter with the quality of dimming. Out of environment (installation, wiring), function, cost or expansion flexibility in future, different projects would choose different input signal. While the quality of the dimming effect is mainly determined by the output dimming mode of driver. 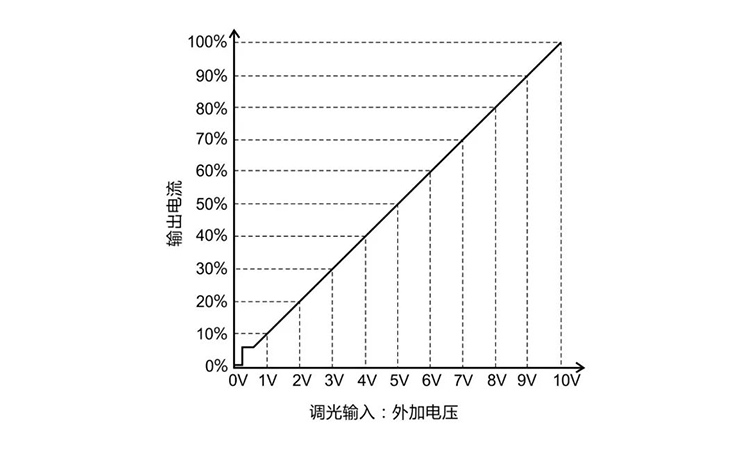 （LED turn off at 8% output current）

Below are several features of CCR at LED:

No low noise is generated during dimming, no ripple in taking photos with digital camera products.

It will cause color shift of the LED when current changes.

LEDs do not work at rated voltage and current, long-term working will shorten LED life.

The LED driver conversion efficiency would rapidly reduce with the reduction of current, thus increasing the power loss of the power system. 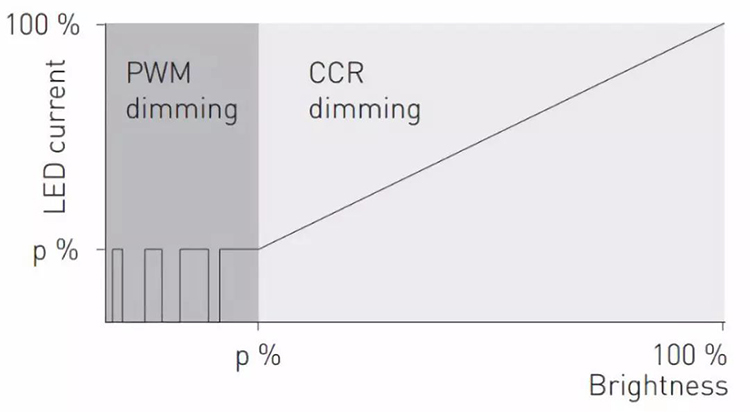 CCR（Analog Dimming）+PWM Dimming means adding PWM dimming mode based on analog dimming, which aims to make up the insufficient dimming range of CCR, at the same time keep the advantage of non-flicker at high brightness dimming of CCR. But both defects also come with keeping both advantages. The practical problems are as following:

Keep the advantage of non-flicker at middle and high brightness dimming.

The accuracy of analog dimming is not high, and the problem of poor dimming linearity has not been improved.

Unnatural during analog and PWM transitions.

Technical at low brightness of PWM is difficult. Most manufacturers meet response delay during dimming after they add PWM dimming into CCR. 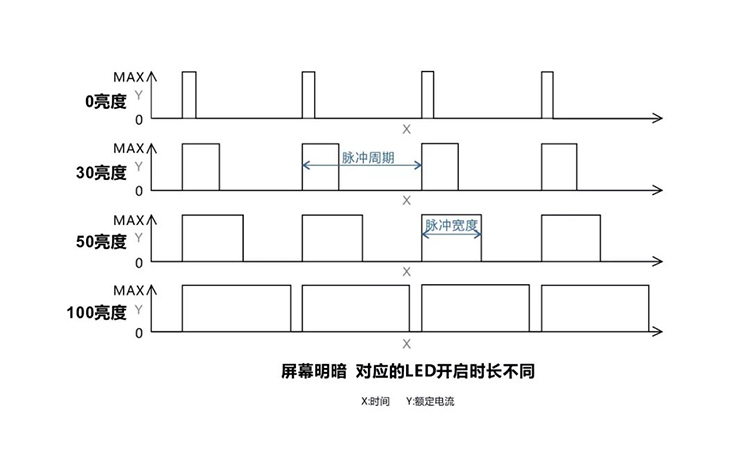 Pulse Width Modulation(PWM), which principle is to change the on-time of forward current by the PWM wave to turn the LED on and off to achieve the brightness adjustment effect.

This mode is often compared to a high-frequency switching action, that is, the LED is repeatedly at 0% and 100% brightness, so the advantages and disadvantages of PWM are obvious (such as stroboscopic problems at low brightness). The master and research at PWM technology determines the quality of PWM dimming. So commonly features of PWM dimming are also obvious:

High-quality PWM dimming, non-flicker in a wide range of dimming.

If the program and hardware do not match well, the drive circuit would easily cause low noise during dimming.

If the PWM pulse frequency is very low, human eyes will feel flicker. And if the frequency is not high, even ordinary digital camera devices can capture ripples and stroboscopic phenomena.

If the PWM frequency is too high, although it will up to flicker-free standard, the dimming gray level range will be reduced and flicker at low brightness.

PWM is the most ideal LED dimming mode at present. However, it is a worldwide problem to improve the frequency of PWM without affecting the effect of the gray scale range.

It still needs certain technical strength to achieve excellent dimming effect. By using PWM technology and grinding it, we can overcome this problem to create a different lighting effect.At present, the minimum dimming depth of individual brands reaches 1%.

In 2016, LTECH has broken through the technical bottleneck to reach 0.1% dimming depth, and the stroboscopic index is the first domestic company to reach the high frequency exemption level.


Is that all for a good dimming driver? 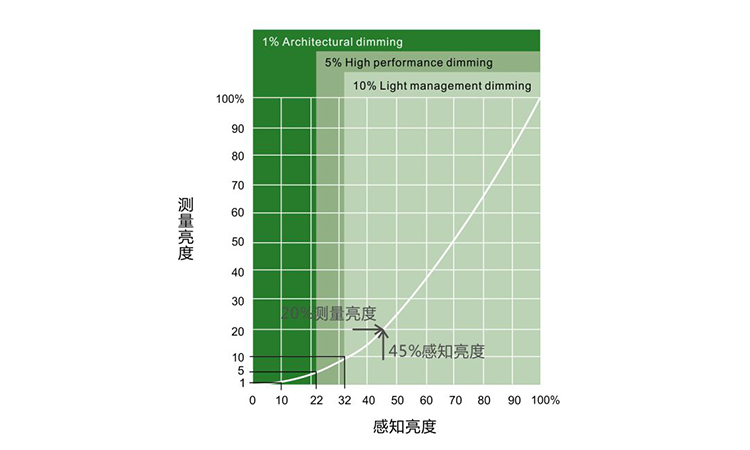 Due to the difference between human eyes perception and measured brightness, when the human eyes needs dark atmosphere, the brightness must be much lower than the measured brightness. Therefore, the difficulty in the range of dimming finally stays in the low brightness region which most sensitive to human eyes.At present, PWM dimming mode drivers of all major brands has their own optimization schemes, but there are not many effective solutions to achieve wide range, high depth, and flicker free throughout.

Two years ago, LTECH pioneered 0.1% dimming depth flicker free dimming (high frequency exemption) for LEDs, and no one has surpassed it!

Two years later, the revolutionary T-PWM ultra depth dimming technology will lead the LED industry for the next decade! 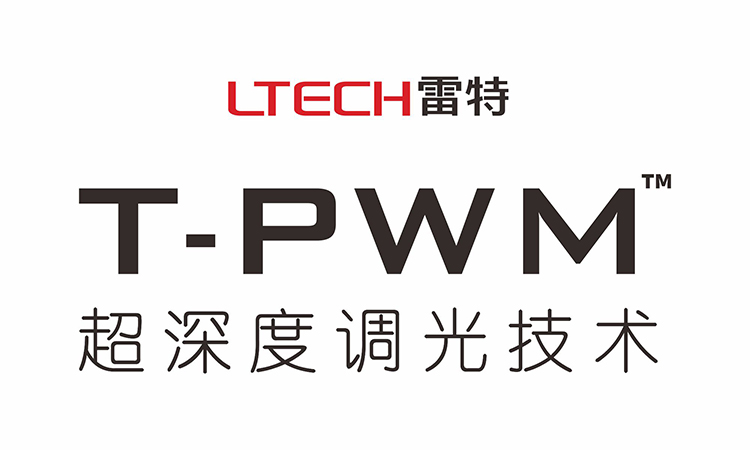 Compared with the previous three dimming methods, the revolutionary T-PWM ultra-depth dimming technology of LTECH has solved all the disadvantages of above dimming methods and retained all the advantages. Besides, T-PWM dimming also has following important breakthroughs: 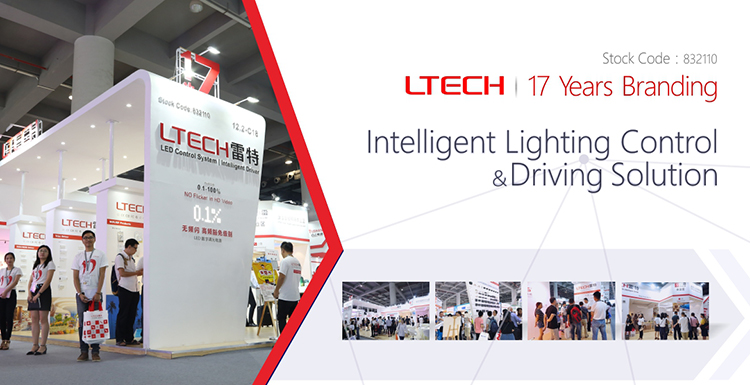 In professional commercial lighting field, the range of dimming mentioned by the editor is far from enough. Welcome to leave your questions at WeChat Official Account of Ltech, and tell us the secret of LED dimming you want to know.

To experience the actual effect of T-PWM dimming drivers, or to learn more about the control technology of commercial lighting, welcome to participate in the third edition of Elicht commercial lighting BBS sponsored by the joint title of LTECH during Nov. 9 ~11th, It’s honored to LTECH to have more deep sharing with you.