Triac technology has developed for a half of century. After then, many digital dimming protocol technologies were be adopted, like 0/1-10V analog dimming, DMX512, DALI and so on. But Triac dimming technology has stable advantages, which are on historical reasons and without signal cables. No need to change original circuit, low cost, and convenient constructions, all these are prefer to engineers. Thus Triac dimmable drivers still covering the largest market shares.

People may ask what compatible testing on Triac dimming we do exactly?

Even many transnational LED driven IC suppliers developed ICs which could be compatible by current Triac dimmers, and general Triac driver suppliers use this IC solutions to realize it. According to hundreds of Triac transistor dimming switch with different specification in the market, actually these ICs can’t do compatibility with most of Triac switches. The problem of compatibility always trouble people. We often hear clients said ”they can’t find any drivers to be compatible well with brands of dimming control system ”. In addition, many Triac drivers meet problems like bad dimming, narrow dimming range, flicker...

2.Compatibility is the match between dimmer and dimmable driver

About problems of compatibility in Triac dimming, an normal problem is phase-cut dimmer generate big difference between the biggest and smallest triggers when dimming, to leads differentiation of LED dimming performance. The mobility scale of trigger is quite big on different brands/models. Thus turn-on time and load power will be affected. Phase-cut dimmer’s turn-on time is related to LED working current, so it affect the glow amount. We assume LED driver has a fixed dimming curve, but performance of driver are different if work for various dimmers. In addition, any nonlinearity on dimming curve could intensify different performance between dimmers. 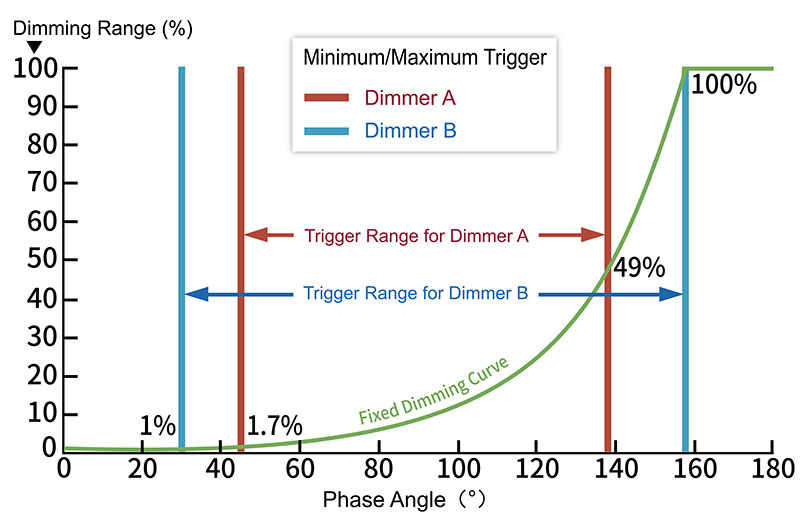 Above figure is a testing for two brands phase-cut dimmers which work with a same Triac dimmable driver. It can’t reach 100% brightness if driver work with dimmer A, which may be on 49% only. Because dimmer A couldn’t support 158° trigger. Furthermore, it couldn’t realize 0.1% dimming on the over 30° trigger. In this figure, it can only reach 1.7%. Comparing dimming A to B on dimming range, A is narrower and on a low compatibility. 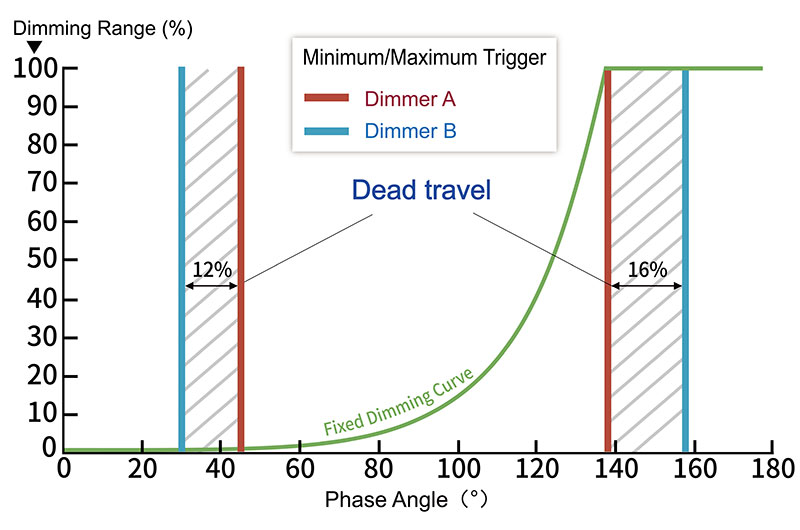 The driver can match with dimmer A if set the smallest and biggest dimming levels separately depends on 45° and 138° triggers. On this case, they would work perfectly. However, there are still some problems if work with dimmer B. For this dimming curve, driver could realize 0.1% minimum and 100% maximum dimming levels. But dimmer will have 12% dead travel on bottom, and 16% dead travel on top. They haven’t any dimming effect on this range even to adjust dimmer.

The main cause of the poor compatibility of Triac dimmers or systems with LED dimmable driver is impedance matching and maintaining current. LTECH Traic dimmable driver built-in "artificial intelligence" algorithm and high-performance MCU, with full self-analysis learning capabilities, starting with a default dimming curve. With "artificial intelligence" recognition technology,Traic dimmable driver moves its dimming curve to fit the A dimmer (red curve A); this curve can also be adjusted to fit the B dimmer (blue curve B) ). Automatically adjust the hardware parameter threshold, corresponding to each dimming system automatically generate a set of reasonable dimming procedures, dimming effect is close to the ultimate, accurate, to achieve a true sense of "intelligent" dimming, can be 99% compatible with a variety of brands dimmer and dimming system minimizes LED phase-cut dimming compatibility issues. 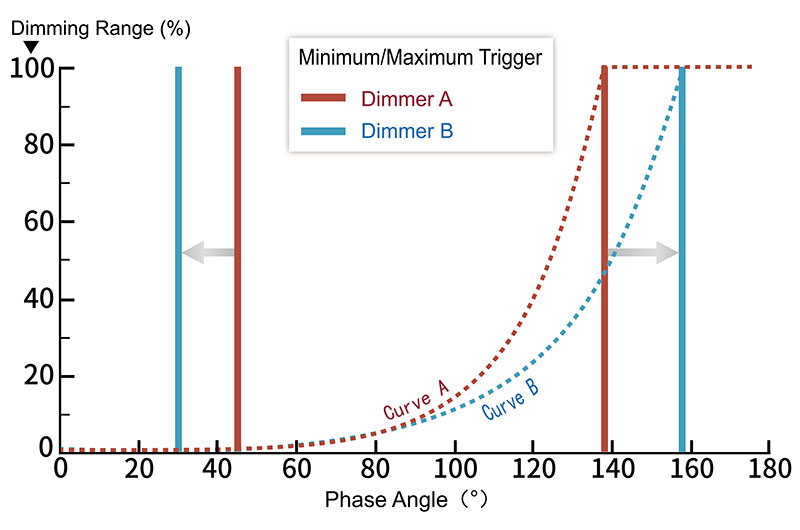 4.Solving the problems of Triac dimming, LTECH T-PWM dimming expertise is obvious to all

In addition to compatibility issues, the common problem of Triac dimming include: dimmers or systems that are unstable at low currents due to low currents, causing LED lights to flicker. The common solution in the industry is to add a bleeder circuit to the input end of the Triac dimmable driver. This bleeder circuit will cause excessive waste of power consumption and poor dimming consistency, as well the dimming range will be narrowed. Each project is different. The addition of this bleeder circuit device by the project owner does not necessarily solve the flicker problem.

Moreover, more than 95% of the dimmable LED driver market uses the traditional analog dimming scheme. The dimming achieved by changing the voltage and current of the LED. There are several problems with such solution:

1.When the current changes, it will cause the color shift of the LED. Because the chromatogram of the LED is related to the current, it will affect the luminous quality of the white LED.

2.When LEDs do not work for a long time under the rated voltage and current, it will affect the lifetime of the LED. 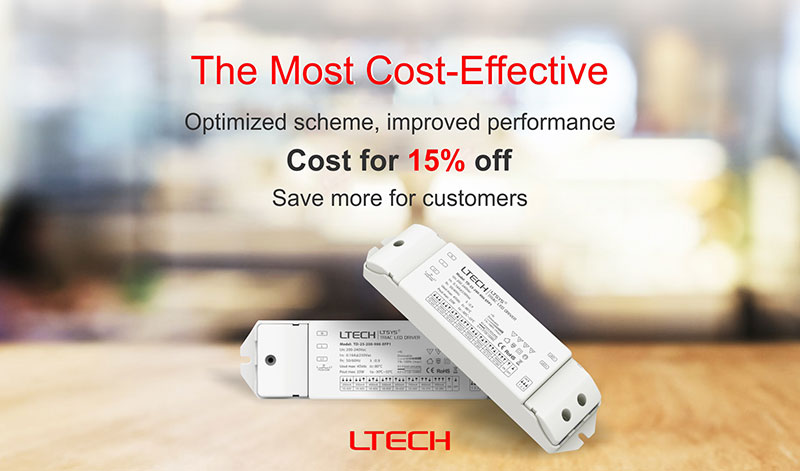 LTECH Triac dimmable driver built-in MCU to program and achieve PWM digital dimming.PWM dimming is to use the pulse width modulation signal repeatedly on / off (ON / OFF) LED driver, to adjust the average LED current.During the programming process to join the special treatment method makes the dimming a linear and stable process.And the dimming is more accurate, which is called the T-PWM dimming method. To avoid the above drawbacks of analog dimming, the T-PWM dimming has the following advantages over that of analog dimming solution: 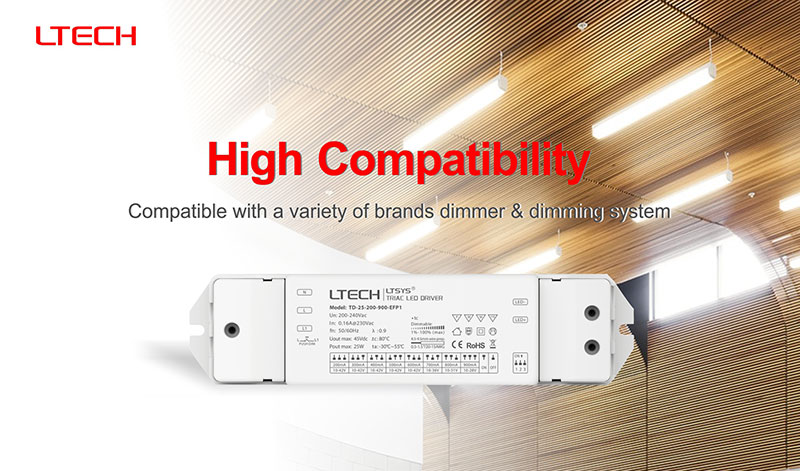 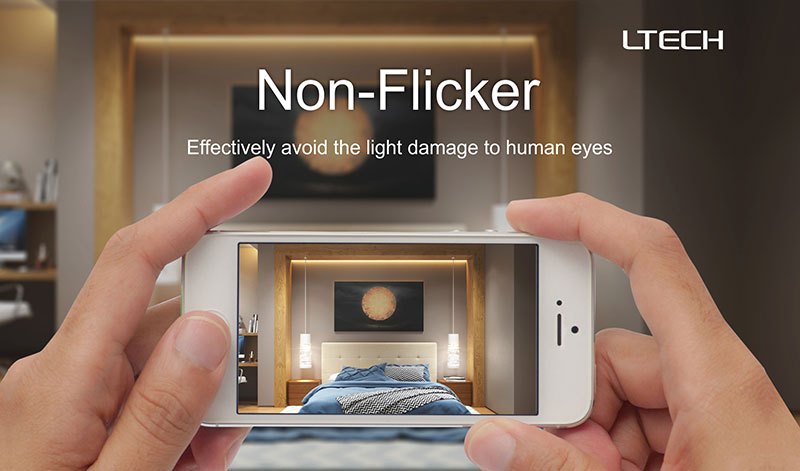 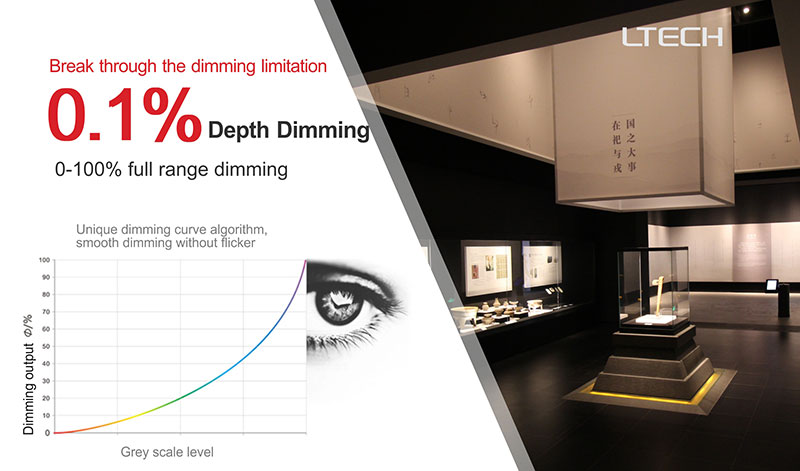 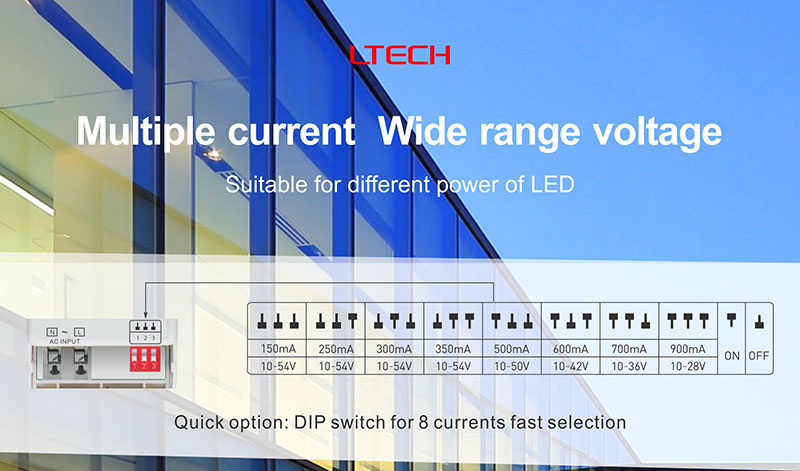 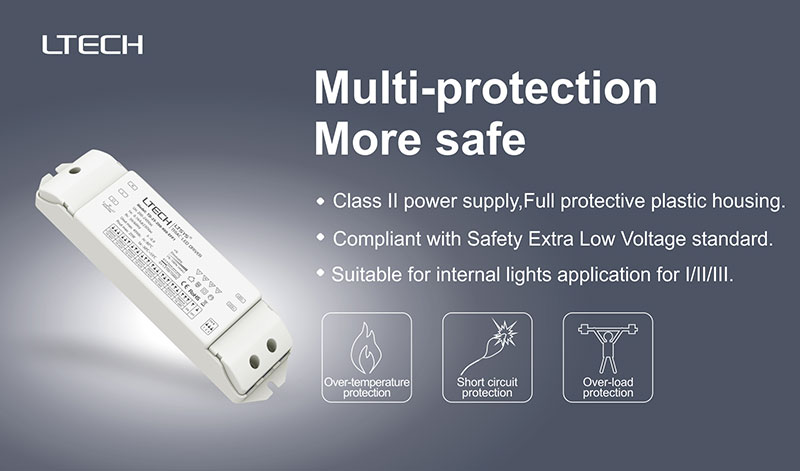 At present, there is an increasing demand for smart dimming in the country. Accurate dimming technology and perfect lighting control effects are the user's selection factors for high-quality dimmable driver products. LTECH Triac dimmable driver non-flicker lighting effects through the National Lighting Test Centre’s quality inspection, high-quality performance is to obtain The Alighting Award for Excellence in "Technicing Award"!

LTECH Traic dimmable driver adopts international advanced technology, aiming at practical application environment and technical difficulties at home and abroad, using wisdom and perspiration to create high-quality dimming performance, so that Triac dimmable driver is as accurate as digital signal. Dimming effect and compatibility are close to the extreme,make the traditional technology revitalize.